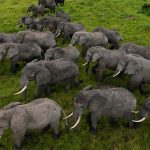 Queen is a must for any safari to Uganda. Spanning four districts (Rubirizi, Kamwenge, Rubirizi and Kasese) in south western Uganda, Queen Elizabeth National Park covers a total area of 1978 square kilometers. It was established in 1952 as Kazinga channel National Park, but later renamed to commemorate the visit of Queen Elizabeth II.

With its rich biodiversity, it is easy to understand why wildlife lovers like it and stands amongst the most visited parks in Uganda. This great habitat to the notable tree climbing lions share borders with Kalinzu forest reserve and Lake George to the east, Ishasha River and Lake Edward in the west, Kasese and Rwenzori foothills to the north and Kigezi Wildlife Reserve to the south.

Queen’s lush habitats are inhabited by over 95 species of mammals including the twenty predators that are common in the Park’s numerous regions. Some of these animals include leopards, lions, spotted hyenas to name but a few.

Various species of antelopes such as Uganda kobs, Defassa water buck, sitatunga, hartebeests and more add to the Park’s diverse species of animals. You can easily see these animals while on game drives or nature walks.

Other than antelopes, Queen Elizabeth National Park is a great hotspot for endless views of varied primate species. Commonly found in areas covered by tropical rainforests like Maramangambo forest and Kyambura gorge, these animals are a favorite for funs of primates.

Some of these are chimpanzees, black and white colobus monkeys, vervet, olive baboons and red tailed monkeys. The elusive species of semic aquatic Sitatunga antelopes and duikers are other beautiful spots in the Park. Not like elephants and buffaloes that are common in every corner of the Park, aquatic Sitatungas are only found in the papyrus swamps around Lake George.

If wild animals don’t appeal, Queen is also home to a plethora of bird species. It is recorded with over 610 species of birds including woodland, water and forest birds that appear in Mweya Peninsula, Maramagambo forest and the southern Ishasha sector.

You can easily get to this protected area in Western Uganda by road via Kampala – Mbarara – Kabale highway or arrange for a private charter from Entebbe up to Kihihi airstrip.

For those who are not sure of what to do in the Park, below are some of the pursuits to keep you excited for all your days in Queen.

Queen’s diverse wildlife is hard to ignore if you are in Uganda mainly for a glimpse of its rich biodiversity. The park has a lot to see and there are several ways to take in the scenic views of these species, game drives are exceptional.

This excursion usually includes drives around the Park suburbs in a Safari vehicle with pop up roof to admire and enjoy the beautiful views of wild animals, plant species, sun set/rise and picture perfect landscapes. Drivers are advised to follow the already established trails, off tracking is illegal and you will be penalized in case you are found doing so.

During the drive, slow speed is maintained to enable tourists see whatever they wish, take a number of pretty photos and as well appreciate the elegant views of the Wilderness. Don’t hesitate to advise your driver in case he is driving at a high speed.

Game driving in Queen is mainly offered in the southern Ishasha sector, Kasenyi plains and Mweya peninsula where a plethora of Wild animals congregate. This activity costs $20 USD per day. For self-drivers it is advised that you hire a park ranger to lead you around during the game drives.

This is a must for those who are in love with primates. If meeting chimpanzees face to face in the Jungle, make sure to be part of the chimpanzee tracking sessions offered in Queen. The time taken and distance moved in the Jungle depends on where these primate spent their last night.

While in the Jungle you are not only limited to Chimpanzees but also you are exposed to multiple Wildlife species such as birds, reptiles, and other primates like baboons, vervet, red tailed monkeys and more. Numerous sessions for Chimpanzee tracking in Queen are offered in Kyambura gorge at a cost of $50 per person.

Other than Game drives, boat cruise is the best way to admire the awe inspiring views of different Wildlife species in Queen including water birds, hippopotamus, crocodiles and animals that draw near the banks of Kazinga channel.

This expedition starts from Mweya and takes about 2-3 hours including a visit to the nearby fishing villages. Boat cruise along Kazinga channel is offered daily at a cost of US$30 per person.

Offered in a group with a park ranger to guide you around, Nature walk is the best way to get close to off the beaten path spots. It includes strolls around the park and offers great encounters with nature.