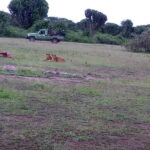 Barely a week after the death of a pride of eleven lions in Hamukungu fishing viallge, another pride of 2 adult lionesses and 7 cubs has been in the place. This dispels wrong information that there are no more lions in Queen Elizabeth National Park following the death a pride of 11 last week. Uganda still has lions including tree climbing ones at Ishasha in the same park. The king of the jungle still roars in Queen Elizabeth National Park.