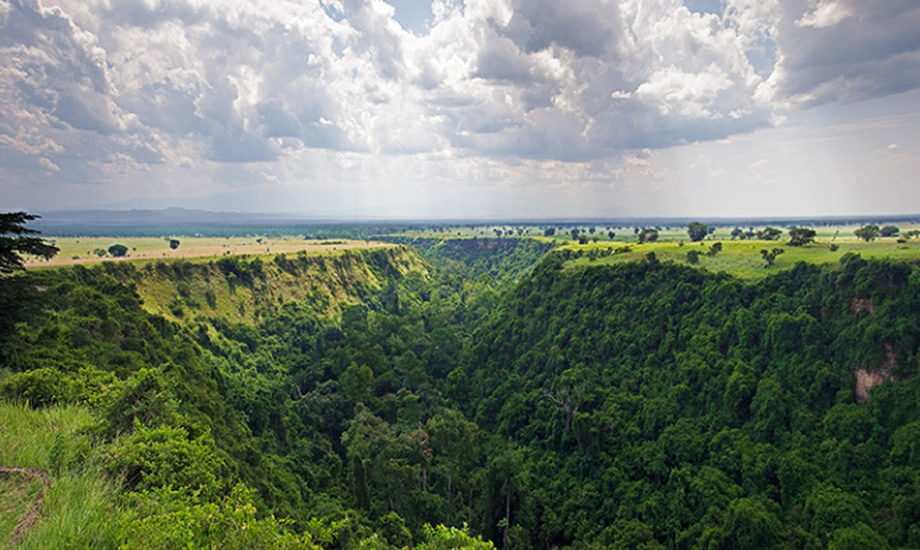 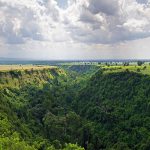 Located on Kyambura escarpment near Kyambura trading centre in Queen Elizabeth national Park, the over 16 kilometer long Kyambura Gorge is part of the Western Rift Valley in Uganda the sprawling savannah continues as before.  It is one of the most incredible views in Uganda– there is also great viewpoint platform from which you can take some great pictures of the Kyambura Gorge surrounded by the Savannah and a rich tropical Forest below. Most tourists who take Uganda safaris through Queen Elizabeth National Park, do not miss the opportunity to track the fast moving chimpanzees within Kyambura.

Don’t miss Kyambura Gorge on your itinerary during your visit to Queen Elizabeth National Park as you are simply amazed as to what they find – scenes beyond the imagination that show the power of nature in creating this gash in the earth, the serene savannah continuing on both sides of the gorge all making Kyambura Gorge a must see spot while visiting Queen Elizabeth Park and no wonder this park is called “A Medley of Wonders.

Move into the underground forest and you will come across a lush, rich Tropical Rainforest on the Equator.  It simply is another world. Whereas on the Savannah above there is an abundance of light, of brightness and sunshine the canopy of this underground forest with its rich foliage blocks out much of the sun unless you are in a clearing and there is no longer a need for sunglasses since you want to take in clearly all that is before you and you cannot afford to miss anything during your time here at Kyambura Gorge.

With a well-informed Uganda Wildlife Authority Guide who will safely take you down the maze of trails of the Gorge walk through this forest and along the Kyambura River in the “Valley of the Apes” in search of the Chimpanzees that have been habituated, a process that takes up to two years making the chimpanzees used to humans and continuing with their activities as humans arrive.  There other primates found here such as Black and White Colobus Monkeys, Red Tailed Monkeys, Baboons, Giant Forest Hogs and other mammals. When it comes to Birding Kyambura Gorge is a birders Paradise and Butterflies abound. As BBC calls it “Lost Gorge”, Kyambura is a hidden secret with its sunken underground forest where chimpanzees and other primates call home.